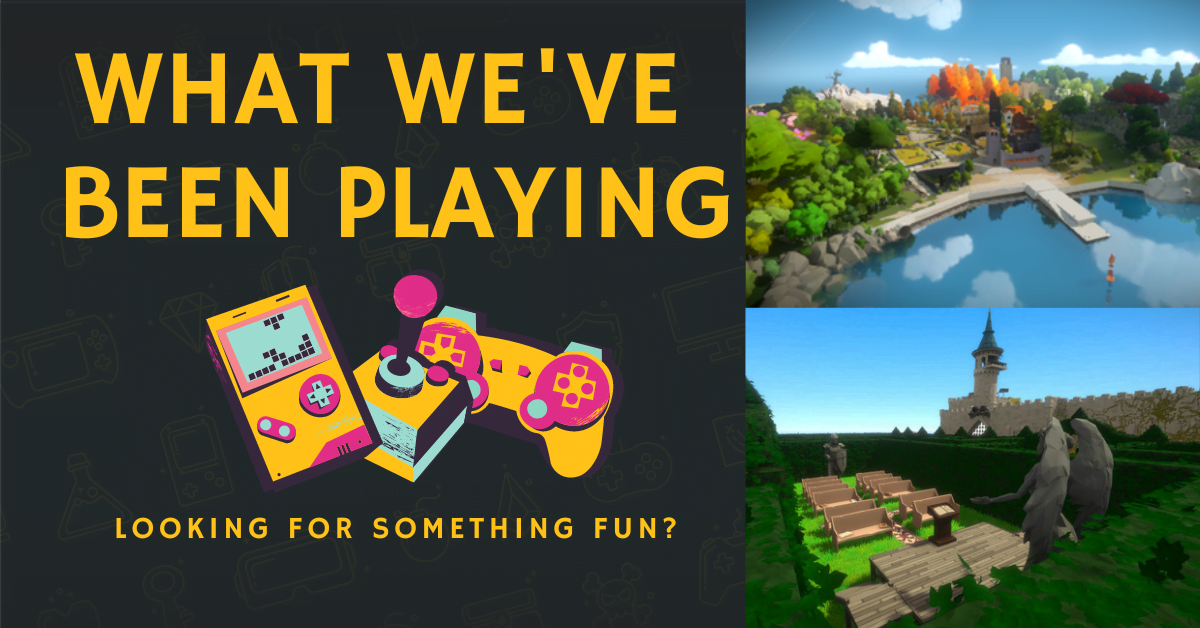 Kelsey’s Picks – The Witness & The Looker 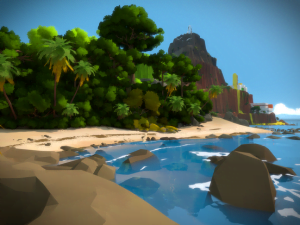 If you’ve played The Witness¸ you’ve likely come out the other side of it feeling accomplished and, if you’re like me… maybe just a little bit annoyed. The game has “very positive” reviews on Steam and is called a masterpiece by many, but the title, inspired by Myst and from the creator of Braid, is essentially just maze puzzles, over and over and over and over. The first few times you conquer the rules of the game (which evolve as you progress) and get a correct answer, you feel accomplished, yes, but on the twentieth time, especially because so often solving a puzzle does little more than open the next puzzle, you may start to say to yourself, “Ok, ok, I get it already.” As Oli Welsh of Eurogamer put it, the puzzles are “self-involved and willfully obscure.”

The game is gorgeous and at times thought provoking (and at other times, eye roll inducing), but many players (myself included) found it tough to forge on when faced with nearly endless puzzles that provide very little sense of accomplishment from solving them. What story there is in the game is obtuse and tedious, as the avenue through which it’s shared is essentially the scenery around you and several voice memos that amble on and on. (Though a quick Google search will bring you to post after post of people being sure that they get the game story’s true meaning–none of whom seem to be able to agree with each other.) The game isn’t bad by any stretch of the imagination, but it does very little to encourage the player onward, and at times the player may even feel punished by clicking this or that button and now being subjected to a many-minutes long lecture delivered from a voice recorder. There’s even one hidden puzzle that takes a full hour (you read that right!) of simply waiting for the image of a moon to move across your screen before you can continue onward. (At least it’s optional.)

Jonathan Blow created a gorgeous world filled with eureka moments and frustration alike, and while The Witness is beautiful, it’s simply not for everyone. Born from this overly long game of convoluted meaning, though, was something quite hilarious (as well as much shorter): The Looker. 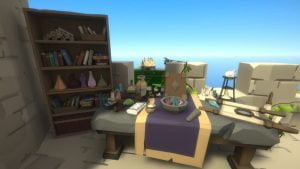 The Looker is a parody game that still has fun puzzle elements, but its main goal is to make you laugh. Beginning immediately with the game hints in the menu screen, it’s clear The Looker is here for a good time, not a long time. The Steam page supports this with its description: “The Looker is a single-player game that respects you as an intelligent player, and it treats your time as… reasonably valuable,” adding, “the puzzles are fun, and, if you really think about it, aren’t the real solutions the, uhh… friends we make along the way?” It has “overwhelmingly positive” reviews on Steam, and is offered at the delightful price point of free.

If you’ve played The Witness, The Looker can serve as a little treat after the obscure monotony of the former game’s seemingly endless puzzles. If you haven’t played Blow’s creation, The Looker is still a fun way to pass the time, though some of the references might be lost on you. (Though to be clear, I don’t think you need to have completed The Witness for The Looker to make sense. An introduction to its general elements is enough to get the joke.) Clocking in at under two hours of playtime, The Looker is a fun little jaunt that will make you laugh throughout.

In the end, I recommend The Witness if you’re a puzzle aficionado who isn’t adverse to putting twentyish hours (at least!) into a puzzle game where the puzzles do evolve slightly but remain the same basic style throughout. Enjoyment of beautiful (if not at times stylistically confusing) landscapes is a plus. The desire to be lectured about history, mythology, and general ramblings throughout the game not required but recommended. Those who need to be served a feeling of accomplishment and satisfaction after each puzzle need not apply.

As for The Looker, if you’ve already played The Witness, I can’t recommend it enough. Whether you love or hate Blow’s creation, you can appreciate the references and humor. If you haven’t spent time on The Witness (or even just watched a segment of a walkthrough), The Looker will probably still be a good time, but some of the references will likely be missed. That being said, I’m not sure getting all the references is entirely necessary to fully enjoy the game. I don’t know when else I’ve laughed so hard at the completion of a puzzle or the press of a hint button. The Looker’s gameplay experience remains light, silly, surprising, and fun throughout, and, if I’m being honest, that’s simply more my kind of game.